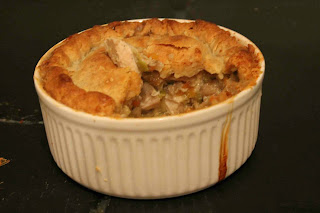 When I think of pie, my first thought is apple. I typically don’t associate pastry with savoury dishes. Brits, though, are crazy about their meat pies. You would think the country was built (an it may very well have been) on the three p’s: the pie, the pint, and the pasty. Ever since I have been surrounded by the phenomenon of the savoury pie, I have been tempted to try my hand at one, but I always held back. I think it may have been because pies don’t exactly look like the picture of culinary excellence and (I must admit) I always thought they looks rather bland and devoid of texture. That, however, is no excuse. Just because other people make bland, colourless pies doesn’t mean I would.My mantra when starting to dream up this recipe was to keep the flavours subtle but complementary. Despite the fact that I love food that gives you a big WHAM of flavour, I am trying to learn and appreciate the subtly of flavour you find in British food. Sticking to this plan, I picked three main complementary ingredients and tried not to mess with them too much. The results were splendid! This is not a recipe for a boring pie. Instead, it’s a comforting mixture of slightly varying textures (the crunchy pastry, the smooth mushrooms, and the meaty chicken) and smooth flavours that work well together. No, the flavour profile is not as in your face as it is for, say, a chilli con carne, but that doesn’t mean it’s any less delicious. Try it and you will agree. 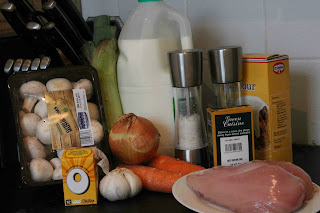 This entry was posted in Chicken and tagged leeks, pastry. Bookmark the permalink.